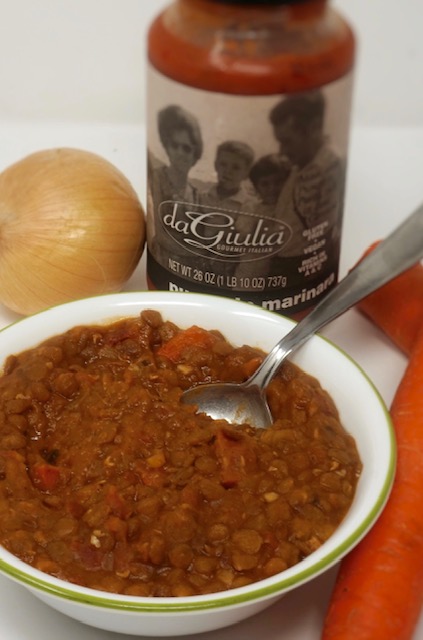 It was suggested to me that I make an old family tradition made every year by my grandmother and now my mom, and before them my great grandmother in the Abruzzo hills of Italy.

Lentil Soup is a soup eaten on New Years Day by Italians all over Italy, as well as America.   Called Lenticchie,  in my Italian home, and has been said to bring good luck if eaten on New Years Day, has been a tradition in my family since I was born.    Upon a bit of research, I learned that this tradition did start in Modena, which is Northern Italy, but has now become a tradition all over Italy, and for certain, all over America with Italian Americans like myself.

I will say that most of the recipes as well as the stories with recipes I read, had the soup being made with sausage as well.    Full disclosure, I didn’t include sausage with my soup this New Years Day, and although the soup was DELICIOUS if I do say so myself, I fully intend to make the soup again next New Years Day and include sausage!  I seemed to remember by grandmother using bacon instead of sausage, but I decided to go vegetarian as well as vegan for this first entry into our challenge.

I looked at a bunch of different recipes and mixed and matched ideas and created my own, with a special ingredient, that scared me because I never cook with this ingredient in savory dishes, but I wanted to make this soup unique and went with my gut and added CINNAMON, and consensus was, overwhelming YES we love it.

salt and pepper to taste

2. Secure the lid and move the steam release valve to sealing.  Use the Manual or Pressure Cook button to cook for 10 minutes at high pressure.  It should take 10-15 minutes for pot to come to pressure, then he cooking cycle will begin to count down.

3.  When the cooking cycle is complete, allow the pressure to naurally release for 10 minutes, then move the steam release valve to Venting.  When floating valve drops, its safe to remove lid

4,  Give to soup a stir to make sure everything tender, add the salt to taste and serve